I’ve been learning from Steve Pavlina since back when he was running Dexterity Software and writing articles about the shareware industry and publishing indie video games.

In March of 2008, Steve published an article titled Hopeless Situations. He was writing about what he learned from playing chess against a significantly better player. The article ends with:

Hopeless situations are awesome because they teach you to become a better player. If you didn’t encounter hopeless situations and lose a few pieces, it would mean you’re playing way too tight and missing some great opportunities. You’ll learn a lot more from analyzing your losses as opposed to your victories, since your losses reveal your blind spots and allow you to improve your play.

If you’re stuck in a hopeless situation right now, surrender yourself to it. Let the captured pieces go, and take them off the board. Don’t just sit there bemoaning your lost bishop. I know he was precious to you, but you’ll manage without him. Then assess what you have left to work with, and make another move.

Incidentally, if your relationship ever succumbs to NxQ (knight takes queen), the proper response is RPxN (Rambo pawn takes knight). ?

I read that and my immediate thought was “RamboPawn would be an excellent title for a video game!”

I registered the domain RamboPawn.com (yes, this domain) and… well, nothing.

I had done game programming in the late 1980’s on the Atari 800, Commodore 64, Atari 7800, and the original Famicom NES. I wrote a game engine for the Atari 7800 version of Ikari Warriors which allowed a LOT of enemies to be on screen at the same time (I don’t know if my work made it to the final production). 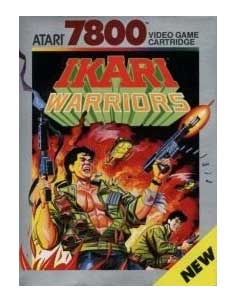 I remember going with my boss to the Galaxy Game room in the Sunrise Mall with the intention to play the game completely through — since how else would we know what was in the game? I think we set up a video camera to record it. I loved the gameplay — the character just kept going up the screen against an onslaught of enemies. We could only keep going by adding more and more quarters!

You don’t need to watch much to get the idea. It just keeps going and going…

But in 2008 I wasn’t able to make any headway in terms of game programming. I had spent too many years just using computers as tools rather than actually programming them and the technology had changed a lot since the days of making sprites move on screen with 6502 assembly language.

The idea fizzled and eventually I allowed the domain to expire.

Recently I started creating card games — I love the feel of playing cards, I love things that are printed, and I think a lot about game design. Great things happen at the intersections — it’s like peanut butter and chocolate and ice cream all mixed together.

I created a game called Warmonger that adds a Blackjack-like combat system to the traditional card game of War!

One of the results of having a Blackjack-like combat (players turn up cards trying to get the best total 21 or under) is that it’s easy to come up with rules for an automated player (just like the dealer in Blackjack). Thus Warmonger can be played solo against 1 or more Robots (I made lots of them and each has different rules for how to play).

… and this intersected with…

One of my favorite card games is basic Klondike solitaire with “Vegas Rules” (You “pay” $52 for each deal of cards and then you get back $5 for each card you score.) Though I love playing with paper cards, it’s a lot easier to play using Windows Solitaire with the computer keeping track of my total score and how many times I’ve been through the deck, etc. (I think that Windows Solitaire is an excellent implementation — although I dislike the way the current Windows version adds a time bonus to the score.)

Somewhere in all this I started thinking that it would be fun to make a computer version of Warmonger that could be played solo.

I have also maintained an interest in game programming and in recent years the tools for game development have improved significantly and become a lot easier to use. Actually a LOT lot easier with stuff like game physics and cross-platform development all pre-built and ready to go. I’m particularly fond of Godot at the moment — I think it is a great tool that’s getting better by the day.

And all of that gelled together and reminded me of RamboPawn and how it could also be implemented as a card game. The play would be similar to a Mattel Electronic Football (one of those toys from my childhood that showed the power of a handheld computer — someday everybody would want to hold a computer!). RamboPawn would have a limited number of choices of which way to move and would need to plan his moves ahead of time in order to survive. 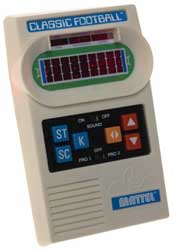 And thus RamboPawn as a card game was conceived.

Development of RamboPawn the card game has given me new ideas for implementing it as a video game (but that’s getting ahead of myself).

The final “do it now!” moment came when I saw a notice for TheGameCrafter Solo Game Design Challenge. That gave me a deadline: July 22, 2018. Follow along on the blog here to see how things are going.

To get email notifications of what I’ve got going on, please sign up for my igpay games email list. You’ll get emails from me (eric@igpay.com) about RamboPawn and my other indie game publishing projects.