How to make card decks have different odds of cards showing up — in a user-friendly way.

I came up with this idea for a different game where I wanted to change the odds of what kind of card a player gets mid-way though the game play.

Let’s say that getting an O card is good and an X card is bad and that there are 10 cards in total.

What if I wanted to usually have more non-X cards show up before an X shows up?

If the cards are played using first the blue deck and then the red deck, then:

After the first 5 cards are used (the blue deck is finished) then cards will come from the red deck.

Thus making it so that later in the game it is more likely that a X will be drawn. And making it that there will definitely be one X drawn within the first 5 cards drawn.

In RamboPawn, to simulate the “waves” of oncoming enemies getting more difficult (as they would in a video game), there is a different deck for each wave. I made these different waves easily distinguishable by both color and text (for players with color vision difficulties) so that the cards for each wave can easily be selected and shuffled together.

Getting the most out of a pack of 54 cards.

In RamboPawn, all the cards have their faces showing when they are played, so that the player can think 3 moves ahead. I thought this was a good way to credit the game of Chess that inspired RamboPawn.

Because the cards are all played with their faces showing, I thought I could get the most usage out of each card by making both sides of the card playable.

Thus the cards break down into 3 decks — a yellow deck, a red deck, and a purple deck.

This makes the final breakdown:

This is what the template cards look like (the actual game numbers and special notes are not filled in): 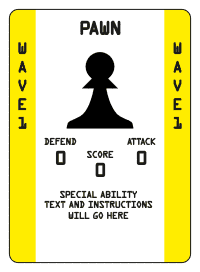 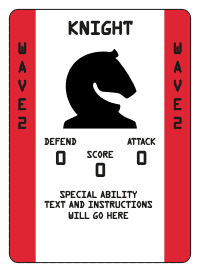 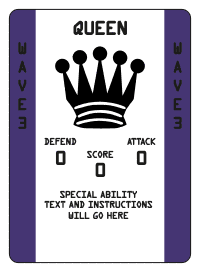 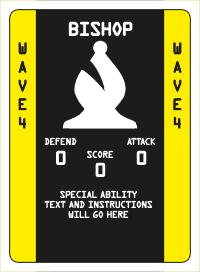 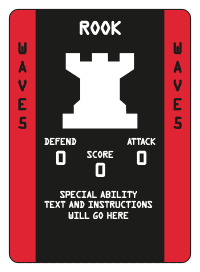 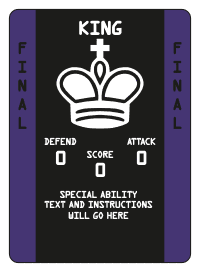